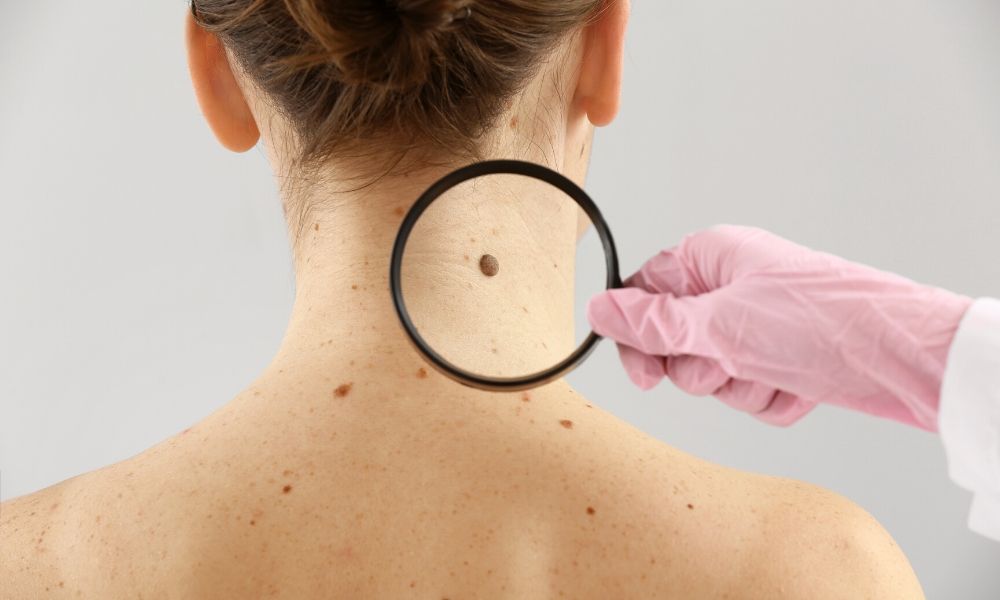 Basically, a birthmark is a discolored patch on the skin, visible upon birth or may gradually appear later. Birthmarks may appear brown, black, or blue and can cover large skin areas of the face, body, or limbs. Others are so small that they are hardly recognizable. More than 80% of newborns are found to have some type of birthmark. In most cases, birthmarks are not a cause of concern and require no medical treatment. Some of these marks fade over time or can be removed. In most cases, birthmarks form randomly and do not indicate severe medical conditions. On the other hand, some specific birthmarks may be caused by a syndrome, but it certainly has no links with prenatal care or trauma at birth. The actual cause of birthmarks remains largely unknown.

Vascular birthmarks are caused by malformed blood vessels in the skin. It is possible that blood vessels developed in heavy clusters or formed bigger than is typical.

This is the most common birthmark. Macular stains are flat, pinkish blots on the skin that typically appear on the neck, eyelids, or scalp. This type of birthmark does not aggravate and usually fades before a baby’s second birthday.

Less than 5% of newborns have this birthmark caused by abnormally-formed blood vessels. Hemangiomas may initially appear as tiny red bumps or patches. These increase over the first 12 months but shrink without treatment. In some cases, hemangiomas can be problematic if there is bleeding or they encroach on the surrounding body or facial parts. Hemangiomas that invade the eyelids or nostrils most likely need to be removed, preventing other risks if the birthmark grows. Babies found to have multiple hemangiomas may likewise have them internally. Large hemangioma growths on the face or the back can indicate other more severe conditions, such as heart or spinal defects. It is best to consult with your child’s pediatrician for proper tests and diagnosis.

Port-wine stains are flat, reddish skin patches brought about by abnormal capillaries in the skin. Port-wine stains grow gradually but do not fade with time, unlike hemangiomas. These birthmarks tend to grow darker and develop a thickened appearance if left untreated. A possible treatment for port-wine stains is laser therapy, which lightens the skin patch’s color and prevents further thickening. Babies found to have large facial port-wine stains are possibly at a higher risk for what’s known as Sturge Weber Syndrome. Your child’s pediatrician can determine whether a port-wine stain requires further tests or treatment.

Pigmented birthmarks appear when there’s a high concentration of pigment cells in a single area.

These are “moles” present upon birth. CMNs appear as brown or black and vary in size and shape. CMNs may darken, thicken, or have hair growth over time. Any form of mole on the body is ideally periodically checked by a doctor, especially large CMNs, as they can indicate melanoma. Even small moles may need to be surgically removed if there’s even a slight suspicion of melanoma.

These birthmarks are flat, discolored skin areas that appear similar to bruises. Dermal melanoses often occur on the lower back or on the bottom, commonly among babies with darker skin.  Dermal melanoses typically disappear by the 24th month of life and are harmless birthmarks.

These birthmarks present as flat, light coffee-colored spots. Between 20% and 50% of newborns have one or several café-au-lait spots. Though these can grow in number or size, these spots do not indicate cancer risks, unlike moles. No treatment is necessary, but if your child has several café-au-lait spots, it is best to have a doctor rule out the NF-1 syndrome, a disease associated with abnormal nerve tissue growth.

Most birthmarks are fade over time and do not indicate underlying medical conditions. Hemangiomas, though, pose a higher risk for skin cancer and should be medically monitored or might require removal.

This treatment involves pulsing light beams in high concentrations to remove or lighten post wine stains. A dermatologist or cosmetic surgeon performs this procedure. Several sessions might be required, and this treatment might be more effective if started at a young age. The results are often permanent, with only a temporary bruising or swelling initially.

Deep hemangiomas which can harm surrounding tissue often necessitate removal. Surgical birthmark removal is usually done as an outpatient procedure. Local anesthesia is applied before removing the birthmark with a scalpel. For large marks, they can be removed in sections over several procedures. Birthmarks are not uncommon in newborns. Birthmarks can be pigmented or vascular. Some birthmarks are permanent, while most fade over time and don’t require treatment. Birthmarks that require removal may be subjected to medication, laser therapy, or surgery. Most birthmarks are not indicative of severe medical conditions, except for hemangiomas which can pose higher risks for skin cancer. Therefore, physician advice is always ideal.
Post Views: 410